The drive-thru coffee shop proposed for the Clark’s Flower Shop site on Hope Street was the last item on the agenda.

When the neighbors finished filing into the hearing room, all the seats were full and many people were standing.

The lawyer for the developer proposing the coffee shop (“Brewed Awakenings”) presented and questioned a small army of witnesses, as follows:

The architect of the proposed new building, parking lot, and drive-thru lane; a civil engineer, testifying that the present building has deteriorated beyond repair; a traffic engineer with traffic flow studies, testifying that the drive-thru is not incompatible with current traffic on Hope Street, even at rush hours; a real estate agent, testifying that the new business would not bring down property values; Mr. Schartner, the owner of Schartner Florists, LLC., the current owner of Clark’s, who has owned it for only a few years, testifying that he can’t make a go of the business; and David Levesque, the developer, the owner of several other “Brewed Awakenings” coffee/sandwich shops elsewhere in R.I. which, he says are highly successful.  (He said the one near the Capital Grille downtown had to close because it was dependent on foot traffic, and there was no foot traffic during inclement weather.)

As I listened, it seemed to me that Levesque, the developer, was speaking out of two sides of his mouth:  on the one hand, he insisted repeatedly that his coffee/sandwich shop would be a place to eat, meet people, and feel comfortable staying a while; on the other hand, he said that 40% of his business would be drive-thru.

It seemed to me that Levesque was overly sanguine about how many cars would be “stacked” in the drive-thru lane.   Orders would be placed at one window and picked up at another.  Levesque said that cars would have to wait at the pick-up window no more than 45 seconds, but I wasn’t able to follow his reasoning.

(If one car in the stack wants to turn left on Hope Street, it’s going to be idling a lot longer than 45 seconds, and so will all the cars behind it!)

Throughout the testimony of the developer and his witnesses, I couldn’t help but be struck by how careful they all were to avoid mentioning the day care across the street (1/2 block to the north) and the public elementary school one and a half blocks west.  The traffic engineer made no mention of the fact that during morning rush hour, prime drive-thru coffee time, parents would be parking and dropping off babies and toddlers, and kids would be walking to school.

The traffic engineer admitted that he hadn’t factored in bicycle traffic.

Anticipating one argument of the neighbors against the project, the issue of “intensification” of commercial activity, one of the developer’s witnesses (or the lawyer, or the developer himself, I don’t remember which) said that the stretch of Hope Street between Rochambeau and Olney was a neighborhood “in transition” between residential and commercial.  As evidence for this statement he cited the double- and triple-decker houses lining that part of Hope Street, saying that they were “four-, five-, and six-family houses, and one 7-family house.”  This was news to me!

(The few businesses in this mile of Hope Street have been there since before I came to Providence 44 years ago; and if there are residential buildings with four to seven dwelling units each, I haven’t noticed them.)

Sixty-one people came to the hearing and I estimate that at least half of them testified, all against the project.

A lawyer (hired by a neighbor) and Jesse Polhemus (vice president of the Summit Neighborhood Association) led off, Jesse quoting the Zoning Ordinance’s section on granting variances.   One of the qualifications for being granted a variance is that “intensification” of business activity does not occur.   (Providence’s Comprehensive Plan also forbids intensification of business activity on this segment of the Hope Street corridor.)

Many abutters testified, expressing their concern about the noise and fumes from idling vehicles in the drive-through lane, and the lights in the parking lot.  (“Brewed Awakenings” would stay open until 10 p.m., and until 10:30 on Friday and Saturday nights.)

Some people asked:  why couldn’t the property, already zoned R-3, be subdivided and dwellings put in?  (On the tax rolls, it’s already two lots.)

One person suggested that rather than being razed, the greenhouse should be preserved as a valuable community resource for people growing their own food, especially in this time of rising food prices.

After the neighbors’ testimony, the lawyer for the developer summarized his arguments and droned on for half an hour, accusing the neighbors of NIMBYism and not buying enough flowers.

In my view, if the coffee shop and drive-thru go in, the 12-foot-high arbor vitaes touted by the architect are not going to shield the abutters from the noise, lights, and fumes.  And, regarding the fumes, one abutter testified that she has an asthmatic child.  In fact, the abutters’ quality of life would deteriorate drastically.

After the lawyer had his say, the developer himself took the floor and harangued us for at least 20 minutes about how his coffee shop would produce jobs (25 – 30, most of them part-time) and generate more tax revenue.  He got very emotional toward the end… but I don’t think his last-ditch appeal changed anyone’s mind.

The Zoning Board of Review’s deliberations began with one member’s stating that he counted 61 people who showed up to testify, the most he’d ever seen at a hearing.

Myrth York, the chairman, held up a stack of letters and a stack of e-mails, each at least one inch thick.  Summarizing them, she said that all expressed opposition to the variance, including letters from our state representative, our state senator, and our councilman.  (She did not mention phone messages.)

In addition to the universal opposition to the project, the Board’s deliberations focused on the issue of “intensification” of commercial activity in that location, which was explicitly discouraged by the neighborhood charettes and forbidden by the Zoning Ordinance and Providence’s Comprehensive Plan.

In the Board’s view, the drive-thru aspect of the project constituted “intensification”.

A motion to deny the variance passed 4 o 1.

A second variance, regarding dimensions of signage, was also denied.  (It became moot when the first variance, to raze Clark’s and build a new building with a drive-thru, was denied.)

Who was the one vote for the variance, and did he or she give a reason?

A Letter from the President March 2021

By Ethan Gyles, SNA President On behalf of current and past SNA leadership, and many many Summit neighbors, I’d like to share gratitude for the hard work and friendship of Monica Anderson, who served for Read more… 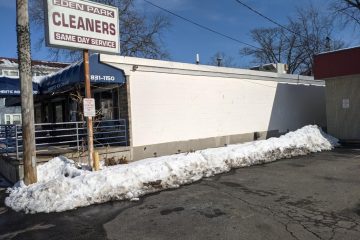 By Torin Mathieu SNA is excited to announce a collaboration with the Avenue Concept! We will be bringing a mural to the south-facing wall of Not Just Snacks (abutting the parking lot for Eden Park Read more…